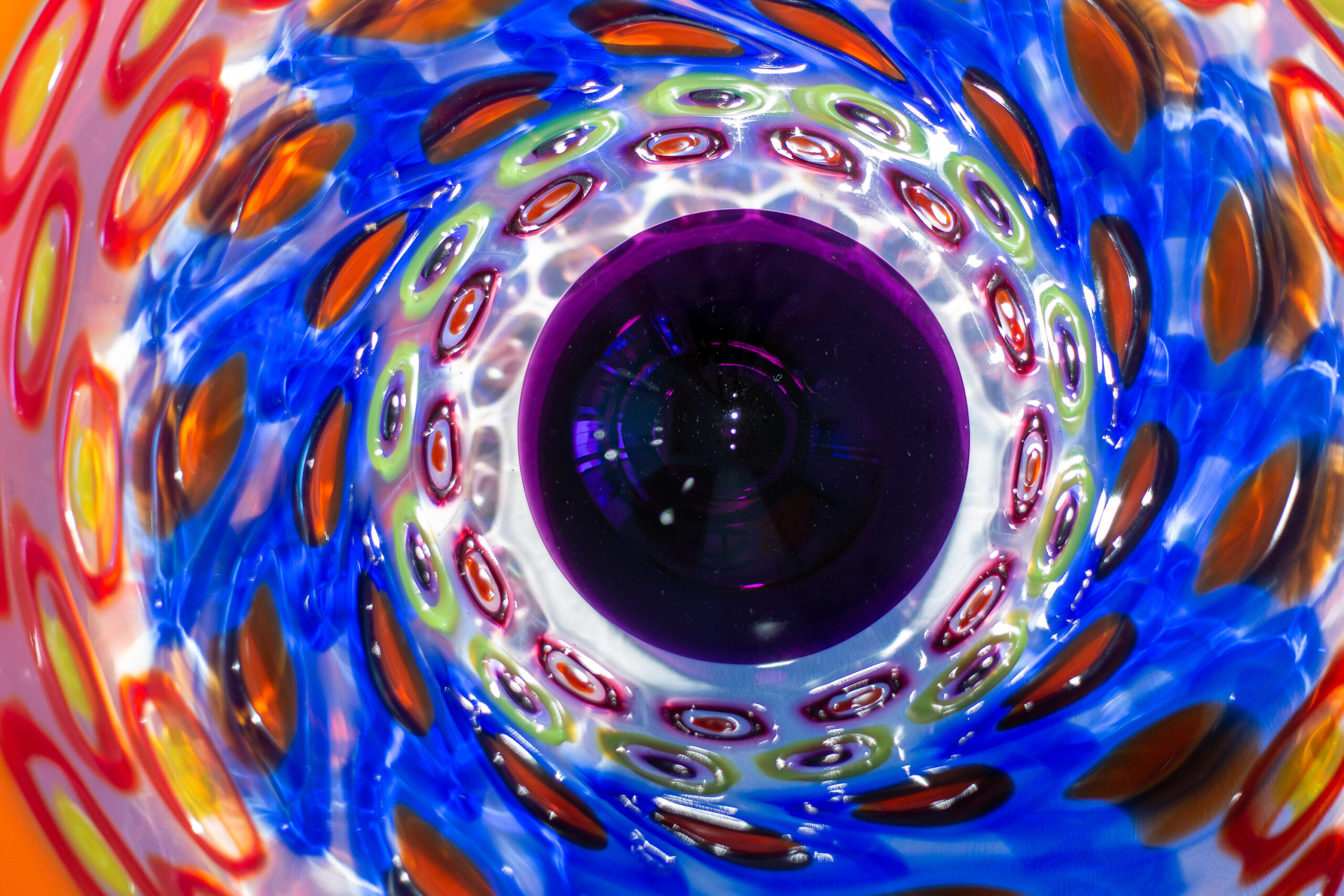 Stephen Rolfe Powell was an American glass artist, a longtime Centre College professor, and one of the founding members of the Community Arts Center (now Art Center of the Bluegrass). In 2019, the Art Center was honored to acquire two of his glass “Zoomers,” the series he was exploring at the time of his death.

These two 5’ tall glass pieces, displayed in the entrance lobby of the Art Center, feature a honeycomb pattern of colors that represents the way nature grows from circular forms to hexagons. Powell selected the pieces himself for the Art Center prior to his death, identifying them as ideal pieces for the space due to their beautiful interaction with the light. Memorial contributions funded the majority of their acquisition. Other work by Stephen Powell can be found locally at the Boyle County Public Library.

Stephen Rolfe Powell was born in Birmingham, Alabama in 1951. He studied painting and ceramics at Centre College and received a Bachelor of Arts in 1974. After working as an art instructor at Draper State Prison and Indian Springs School, Powell attended LSU in 1980 and earned a Master of Fine Arts in Ceramics in 1983. It was during this period that Powell first encountered hot glass, which quickly became his obsession.

Powell exhibited his work nationally and internationally and participated in workshops, demonstrations, and lectures across the globe. He worked in Russia, Ukraine, Australia, New Zealand, and Japan and demonstrated at multiple Glass Art Society Conferences, as well as the 2002 Winter Olympics in Salt Lake City. One of the highlights of his travels was an exhibition of his work at Venezia Aperto Vetro in the Palazzo Ducale in Venice, Italy. Powell was one of only eight American artists invited.

His intricate, colorful vessel sculptures can be found in museums across the country – including Louisville’s Speed Museum and the Cincinnati Art Museum – as well as in private collections and the Maker’s Mark Distillery in Loretto.

While making his mark on the international glass world, Stephen was equally devoted to his role as teacher and mentor at Centre College in Danville, where he was a professor for more than 35 years. Originally hired to teach ceramics and sculpture, he founded a glass program at Centre in 1985 that attracted prospective students from around the country.

As a testament to his passion for glass education, Powell was honored with Kentucky’s “Teacher of the Year” award in both 1999 and 2000. In 2004 he was presented with the Acorn Award by the Kentucky Council on Post-secondary Education and in 2010 he received the Artist Award of the Governor’s Award in Arts. In 2012, Powell was presented with the Distinguished Educator Award from the James Renwick Alliance in Washington, D.C.

In August of 2022, the Art Center exhibited The Power of Color: A Stephen Rolfe Powell Retrospective which featured pieces from Powell’s early career to his more recent glass pieces. To view the archived exhibit page, click here. To view the online gallery, click here.

Thanks to those whose major gifts made the acquisition of Stephen’s work possible:

Art Center of the Bluegrass